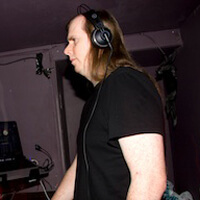 DJ Toast was born in New York, which apparently makes him "eeeaast siiiidde." He started djing in 1987 in two very different clubs in London: in one playing bands beginning with M: Metallica, Ministry, Motorhead, Megadeth, and so on... in the other playing hip hop (which was an exciting time, just as Mantronix, Public Enemy, Ice-T, LL Cool J, Beastie Boys, and Run DMC were all starting to make an impression). His most notable early gig was playing at Borderline to a crowd which included Kylie Minogue. mmmmm.

DJ Toast, whose real name is Alec Nicholson (and whose nickname remains a mystery), came to study music at Glasgow University in 1992 and graduated 10 years later, having spent too much time playing records and not enough time writing essays about them!

He got caught up in student union life, and has played in a popular student union every week for 11 years now, doing various nights including guitar and funk music, but first and foremost a big weekly cheese-fest.

DJ Toast had occasional guest spots in Manchester at a few stylish and trendy places before the novelty of jet-setting wore off, and spent a couple of years DJ'ing functions at a local club, the small matter of it burning down caused a change of scenery and the start of a happy career in The Shack which again ended in tragedy.

He organises a Tuesday night excursion every week where he drinks lots of beer and tries to remember to play indie records in between triple measures of Jack Daniels.

Toast is currently wowing Glasgow's movers and shakers with his unique brand of long-haired DJ'ing every Wednesday in Bamboo, playing the finest mainstream music, with the crap expertly filtered out.

Although Toast is a very busy DJ, he occasionally finds time to annoy his neighbours by playing the drums, the piano, and of course his beloved 1210s.